My husband and I have been through 3 separate febrile seizures between our two boys, the first and third were both relatively straightforward presentations of a Simple Febrile Seizure an the second one was a Complex Febrile Seizure. In the first and third cases they regained consciousness immediately and after a quick visit to the emergency room for monitoring we were discharged- no follow up with neurology needed.

The second one, the Complex Febrile Seizure, was different. I can recall a lot in incredible detail, yet the timeline is fuzzy, and there are a few things I would do differently – it is difficult for me to even retell the story chronologically. But I am going to tell it as best I can.  I needed to hear this from other Moms when it happened to me, and frankly there’s not a lot out there from real moms on Febrile Seizures- and almost nothing on Complex Febrile Seizures.

Let’s start with what it is. A Complex Febrile Seizure is generally defined as a seizure lasting more than 15 minutes, or multiple episodes occurring in 24 hours.  It occurs in less than 5% of Febrile Seizure cases (Febrile Seizures affect 2-5% of the population)…most Febrile Seizures are Simple Febrile Seizures.  The primary source of a febrile seizure is an accelerated jump in the fever, not necessarily how high the fever actually got (though they can often be associated with very high fevers).  Feel free to ask any questions…I don’t want to make this too long 🙂

H (our youngest son) was 11 months old at the time.  He had a low grade fever in the afternoon, and we didn’t give him anything, allowing him to fight it off on his own.  A few hours later he still had the fever and was clearly uncomfortable, so we gave him Tylenol.  We took his temperature a little while later to see if it had come down, and he hadn’t responded to the Tylenol.  We called the nurse line at our pediatrician and were told nothing to do or worry if it was under 104. We thought it was weird that a fever wasn’t responding to fever reducer so I brought him to the Urgent Care anyway, just 1 block from our home.

His first seizure came while we were in the waiting room at Urgent Care.  I saw it.  I didn’t even know 100% what it was at first, but something happened.  I yelled to the receptionist to get a Doctor.  It was the lowest thing on her priority list.  She got me a nurse after several minutes.

Gman (our older son) had just had a Simple Febrile Seizure about 6 months prior. So in some sense I sort of knew what had happened and what to do.  But this time it was different. H was gazing to the side.  He wasn’t “there” he was somewhere else and couldn’t seem to hear me or look at me.    The nurse took his temperature at 103.5 and informed me they didn’t have suppository fever reducer there to push to him, and he would need to go to the ER to get that.  We had been instructed to drive Gman to the Emergency Room at Children’s Hospital (CHOC) after his, and so I decided to walk home to bring H to the ER.  Except he had another seizure on the one block walk home and the gaze became scarier. He was completely unresponsive.  We called 911 and they took us to the closest hospital. Which was unfortunately not CHOC.

He was pushed anti-seizure meds in the ambulance.  They assured me from the back that he was doing great but as we walked into the ER a nurse took one look at him and said “He’s seizing right now!” and we all looked…the seizures just continued through 3 dozes of Ativan…over about 45 minutes. They just kept coming.  No one was counting them or measure their length, it was a hot mess. He remained unconscious, with an IV in his forehead and another in his arm.

I asked the nurse if he was getting oxygen and she thought he was. The ER doctor would stand 6 feet away from him and give the nurse instructions, it was the weirdest thing I’ve ever seen.  He would peer at him from far away and whisper orders.

Finally after almost 90 minutes with no response to the 4 doses of meds he’d been given, the nurse announced that they could no longer handle H’s emergency. I was told we needed to pack him up into another ambulance and transport him to a choice of three hospitals.  The closest, the next closest and the furthest (which was Children’s Hospital). She demanded to know which one as she held a phone in her hand to call 911 again.

I inquired which was the best hospital for him and was told they could make no recommendations but that they needed to know who to call, quickly.  She reminded me of the name of the closest hospital.  It was terrifying because we’d just moved and we didn’t really know the local hospitals.  But it felt like she was trying to get me out, and to limit liability by getting me to go to the next closest hospital.  I have .01% lawyer inside. It wasn’t right.

It was around this time my husband was able to meet up with me.  He was delayed because he needed to find someone to take our older son- since we had just moved to a new city, we barely knew our neighbors…but they generously took a 2.5 year old while hosting their daughter’s birthday party.   Definition of good neighbors.  Good people are out there. Just saying. I digress.

I had a few friends who were nurses at Children’s Hospital in Los Angeles in my 20’s and I recalled they got all the serious trauma cases- we decided to roll the dice and go with Children’s despite the distance.

By this time H must have had 10 seizures, maybe more. The doctor at Children’s took over remotely, ordered phenobarbital and stopped the seizures within minutes without ever even laying eyes on him.  Why the ER doctor didn’t order the phenobarbital for him will always be a mystery to us.  H could have had several less seizures had he gotten it sooner.

Children’s sent their own emergency transport team to pick us up. When we arrived at Children’s we were immediately delivered into the PICU (Pediatric Intensive Care Unit) where it would be 14 hours until H would open his eyes again.

For 14 hours we wondered whether he really had gotten oxygen during his seizures.  We worried whether our child would wake up, or a shadow of our child.  We wondered how much brain damage could be caused by the number of seizures he had experienced. We wondered how high his temperature had actually gotten and how long it had stayed there and how that could have affected his brain.

In the PICU, doctors informed us that the nature of his seizures was also consistent with other, more serious, conditions including brain tumor and spinal meningitis, which had to be ruled out right away. They would need to perform a spinal tap, a CT Scan, and an EEG…among others.

We were presented a stack of paperwork and releases to sign.  I inquired about whether the doctor was a Resident, Attending or Full Time Doctor.  She was a Resident.  I asked if she’d ever performed a pediatric spinal tap.  She told me she had performed a spinal tap (inferring no, she had never performed a pediatric spinal I guess).  I asked for the attending to perform the spinal – and was told he could be hours until he could get to it, and they really needed to know sooner if he had something like spinal meningitis.  It needed to be ruled out.  I reluctantly signed.

H had a rotation of tests and medications, which were at any and all times of the night and day.

We ate and slept in his room, afraid to leave. Thankfully they have a Ronald McDonald room in the PICU.

My mother-in-law was able to catch a late flight and arrived at 4am, and H was still unconscious…but she was able to take our older son for us in the morning (one neighbor had passed him off to another neighbor for the night so we could both stay with H), and let the dog out. Our dog is a champ, he didn’t even pee in the house after 12 hours, good dog.

When H finally woke up he was angry and disoriented and uncomfortable.  He had an IV in his forehead, and one in each arm (I am not including those photos as they are just wretched and scary).  Plus he had all the monitors on him.  Slowly our little H came back.

It took 12 more hours before we knew he was there, our little guy.  We certainly couldn’t say for sure all was 100% clear, but we knew if we were facing anything, we weren’t looking at major neurological hurtles any longer. 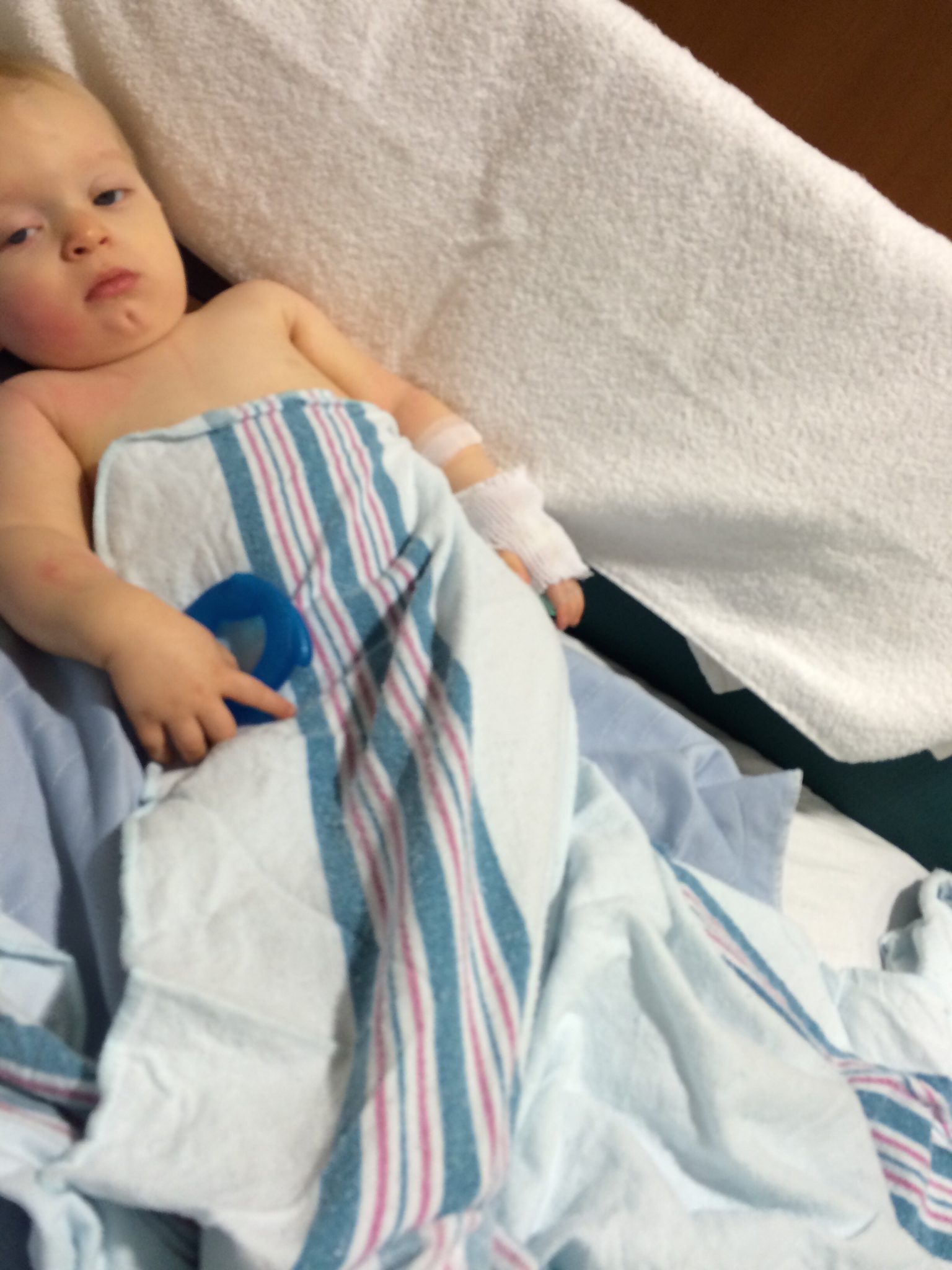 It was rough for awhile but he had a lot of meds in him- and slept a lot from the phenobarbital and Ativan plus pain relievers. After two days we were moved to Neurology, and he was eating baby food again and all the tests came back clear…the deduction was complex febrile seizure.

After three days, we were discharged.

Hindsight is 20/20 and this may all just be useless but in case it helps anyone. I’m not a doctor just a MOM so read, do your own research and make your own decisions.

The road to Big Falls was closed so we stopped off