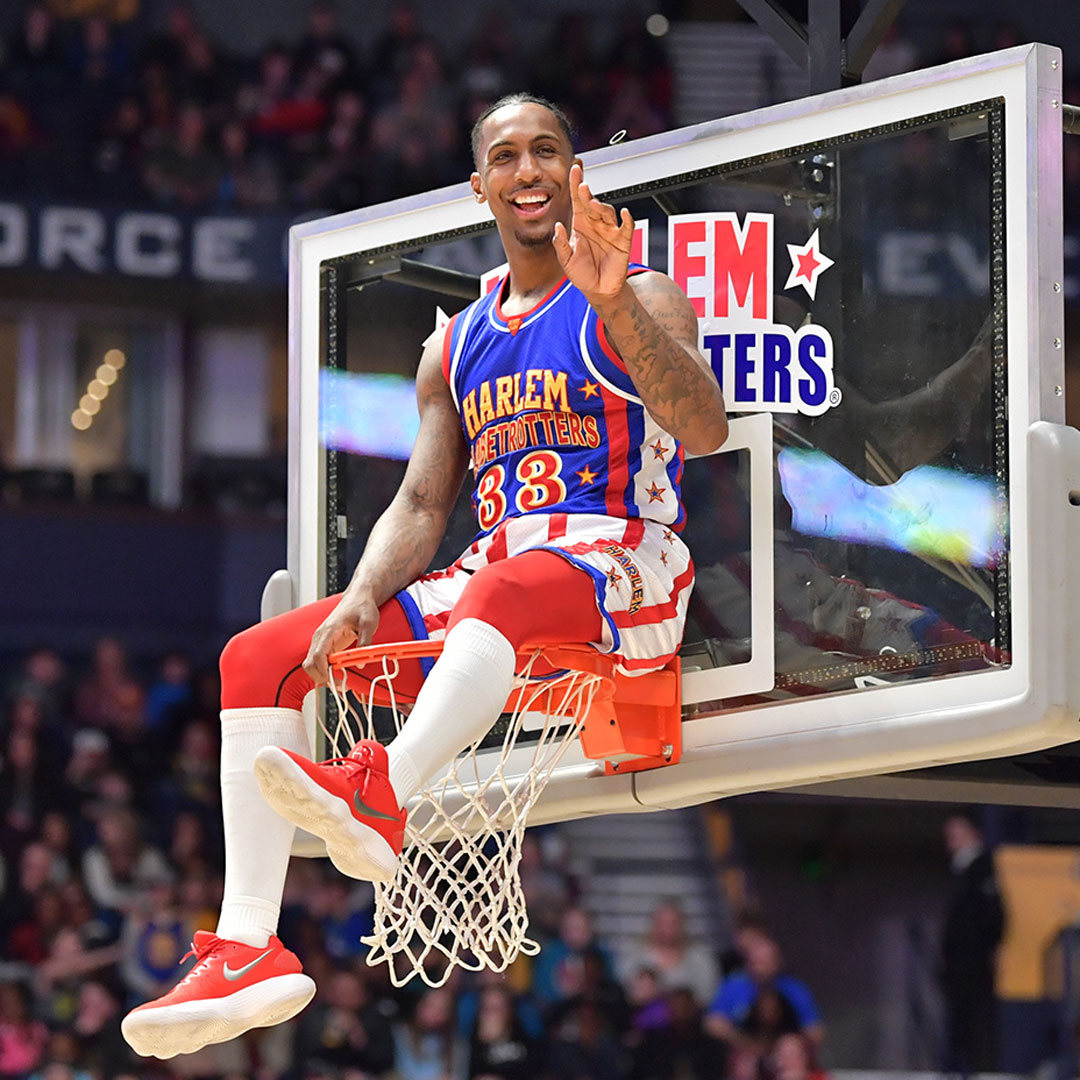 The 2019 Fan Powered North American Tour will be coming to Southern California this month! The Harlem Globetrotters are currently in the midst of their 93rd year of touring, during which the team will play in more than 250 North American markets, as well as 30 countries worldwide.

*use discount promo code FUNFAM to save 25% on Globetrotters tickets!* 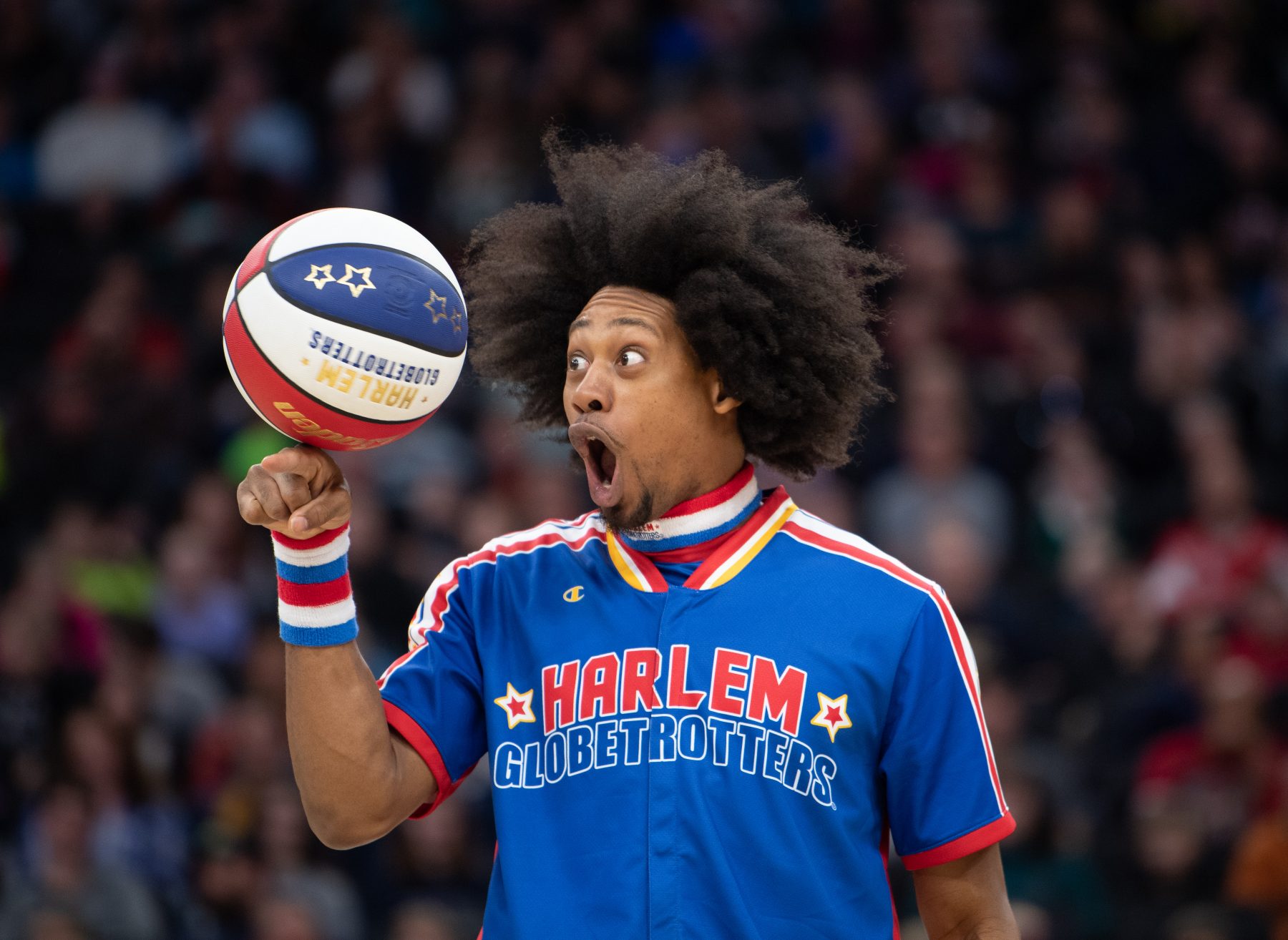 Hope to see you at the show!

PS: If the Harlem Globetrotters are down your alley, check out DCappella and Disney on Ice! Looking to go out before or after the show? Try Chin Chin!

The Harlem Globetrotters are a worldwide icon, synonymous with family entertainment and great basketball skills. The Globetrotters represent nine decades of breaking down barriers, acts of goodwill and a commitment to fans that goes beyond the game.

Abe Saperstein founded the team in 1926, and they played their first road game in Hinckley, Illinois, on Jan. 7, 1927. Since then, the Globetrotters have entertained more than 148 million fans in 123 countries and territories worldwide – introducing many to the sport of basketball – pioneers in popularizing the slam dunk, fast break, the forward and point guard positions, and the figure-eight weave.

Defeating the Chicago Bruins in 1940, the Globetrotters won their first World Basketball Championship. In 1948 and 1949, the Globetrotters stunned the world by twice defeating the World Champion Minneapolis Lakers. They were socially influential and quickly became recognized as the world’s best basketball team, showing that African-Americans could excel on a professional level.

The victories over the Lakers accelerated the integration of the NBA, as Globetrotter Nathaniel “Sweetwater” Clifton became the first African-American player to sign an NBA contract, joining the famed New York Knicks in 1950. The Globetrotters also embarked on their first-ever international tour in 1950, played before their largest crowd ever – 75,000 – at Berlin’s Olympic Stadium in 1951 and finished the decade with their first-ever trip to the Soviet Union in 1959. Wilt Chamberlain was part of the historic Soviet Union tour, as the Hall of Famer played a full season with the Globetrotters in 1958-59. After starting his NBA career, he still played parts of several other seasons with the Globetrotters, joining the team when he could between NBA seasons. Chamberlain said that some of the most pleasant days of his life were playing for the Harlem Globetrotters.

The Globetrotters enjoyed immense popularity in the ‘70s and ‘80s. “The Harlem Globetrotters” cartoon show on CBS earned some of the highest ratings in the history of Saturday morning television, the team had their own live action Saturday morning variety show, “The Harlem Globetrotters Popcorn Machine” and appeared numerous times on the beloved “ABC’s Wide World of Sports.” In 1985, Olympic Gold Medalist Lynette Woodard joined the Trotters, becoming the first female to ever play on a men’s pro basketball team and helping to blaze a path for the WNBA.

Former player Mannie Jackson purchased the team in 1993, becoming the first African-American to own a major international sports and entertainment organization. He tripled the team’s revenue in three years and quadrupled its size in five. The team was also active in philanthropic efforts, with charitable contributions totaling over $11 million under Jackson’s guidance.

Globetrotter Michael “Wild Thing” Wilson set a world record in 2000 by dunking on a 12-foot hoop at Final Four Weekend… a record that stands to this day and one of 21 world records currently held by Globetrotters players.

The team confirmed their standing as one of the world’s most influential basketball teams in 2002, receiving the sport’s highest honor with induction into the Naismith Memorial Basketball Hall of Fame.

In 2005, a documentary, “The Team That Changed the World,” aired nationwide, while the first verifiable account of the Globetrotters’ history was told in the book, “Spinning the Globe: The Rise, Fall and Return to Greatness of the Harlem Globetrotters.” In September 2005, Shamrock Capital Growth Fund purchased 80 percent of the team from Mannie Jackson. Jackson eventually stepped back from day-to-day functions, and the Globetrotters announced the appointment of Kurt Schneider as Chief Executive Officer in May 2007.

During Schneider’s tenure, the Globetrotters re-established the Brand as a worldwide entertainment powerhouse, with record-setting years of gross tour revenue, reigniting their pop culture following, exponentially increasing merchandise sales and online traffic, broadening their community outreach programs and expanding their international business by opening a permanent office in China.

In January 2008, the Globetrotters burst back onto the national and network television scene with “Harlem Globetrotters: A New Generation,” an hour-long, primetime special that became the highest-rated program in MyNetworkTV history. The following year, Globetrotter stars Big Easy Lofton and Flight Time Lang competed in the first of their three runs on the Emmy Award-winning reality competition program, “The Amazing Race.” The team has also had guest spots on smash TV shows such as “The Tonight Show,” “American Ninja Warrior” and “Sesame Street,” along with several nationally-televised specials on the ESPN family of networks.

On October 1, 2013, the Globetrotters were purchased by Herschend Family Entertainment, the largest family-owned themed attractions company in the U.S., marking an expansion for the company into new media, audiences and markets.

The team ushered in a new era in 2016 when Howard Smith was named team president, taking over leadership of the organization, which continues to raise the profile of a new generation of stars, while embracing the extraordinary heritage of the team’s legendary history.

The Globetrotters’ show features even more amazing basketball skills and wizardry, with a continued focus on family entertainment. For their 2019 Fan Powered World Tour, basketball’s greatest innovators will give their fans an even greater chance to interact with the team’s stars. At each Globetrotter event, fans will have over 20 opportunities before, during and after each game to directly interact with the team’s stars – that’s a 30-percent increase over any previous Globetrotters show.

Off the court, the organization will continue to evolve the company beyond its vibrant live event business by increasing alliances with global partners, developing a full line of licensed products, executing a multi-media strategy to gain worldwide saliency and continuing the brand’s legacy of deep social involvement in local communities.


Error: API requests are being delayed for this account. New posts will not be retrieved.


Error: API requests are being delayed for this account. New posts will not be retrieved.